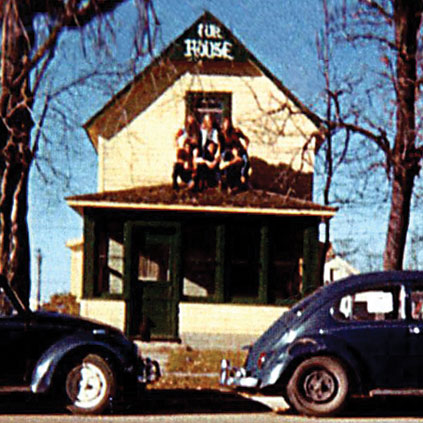 The band's name is the address of the infamous party house where they lived and recorded on the Canadian/US border in the early 1970's: Our House, Lake of the Woods, MN. Billed as an "international garage band" (from Indonesia, Haiti, and 5 States), the band decided to finish the songs, and for the first-time release 3 albums from a 6-album box set they had written and recorded at the time. "We felt there are quite a few songs here that the world should have access to," state band members and songwriters, Rick Stinson and Ron Sterlekar.

The tapes (now on CDs), were rediscovered in Los Angeles and Houston after 40+ years. Now known as The Lost Tapes series (Volumes 4, 5 & 6), they were remixed and produced in Texas, with additional musicians and vocals contributed by friends. “They added some amazing stuff…holes that were purposely left in songs due to the restrictions of recording equipment used in the early 70’s.”

Because the tapes were originally recorded on 2- and later, 4-track recorders, and after decades of sitting in storage units, the songs have that ‘garage band’ raw edge about them. In 1973, the band would try out their new material in Winnipeg, Manitoba, record it, forgot about it…and immediately started writing new songs. The original tracks are now combined with the additions, but with many instruments and vocals being re-recorded note-for-note. “These albums are definitely for listeners who like exciting and inspired guitar solos,” says Stinson.

“We wrote and recorded much more than the initial 3 albums after we all left Minnesota…and continued to write and improve as songwriters,” adds Sterlekar. “The music covers the gamut from hard rock, psychedelic rock, to bluesy love songs. We feel there are some rock classics in here.”

Stinson: “We believe the songs now sound the way they were originally created to sound. Hopefully bands, looking for new and unexposed material, will make them even better.”

The focus will be on introducing the last three albums (The Lost Tapes), including Volumes 4 and 5, Welcome to The Party, Part One and Part Two, and Volume 6, Minnesota Nights. They also include a few remixes and live cuts from the three earlier albums.

“No record company was ever going to find us in that wilderness.” But it makes you wonder what could have been if they had been found.